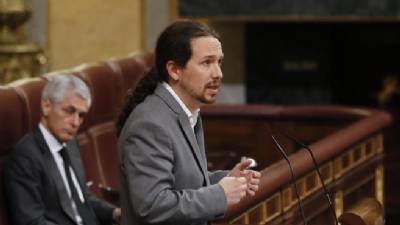 FAMOUS the world over for his trademark ponytail, when deputy president and leader of left-wing Podemos announced on social media that he had ditched his usual hairdo, Spanish residents rushed onto Instagram to find out what he had done with his locks.

Iglesias, 42, is instantly-recognisable anywhere on the planet for his tousled brown ponytail and beard, and for many of his followers, supporters and voters, the thought that it might have faced the chop and made him 'blend in' with the rest of Parliament caused a furore.

What with the heatwave and my kids pulling my hair, it was time for a new look,” Pablo said on Instagram, adding a smiley-face emoji.

But the picture he had posted of himself sitting in his office at home in a shirt and tie with his headphones on instantly reassured fans of his famous locks, and disappointed those who were expecting something sensational.

The ponytail has been wound up into a high bun to keep it out of the way of his two-year-old twin sons and his baby daughter, so it seems it has been spared the scissors.

Iglesias and his wife, Irene Montero – one of Spain's youngest ministers, leading the equality department at just 31 years of age – went through the mill with Manuel and Leo, who were born three months' prematurely in 2018, but happily, the twins came through their ordeal and are now healthy and happy.

SPAIN'S president Pedro Sánchez has urged the UK to scrap its plans to change the Brexit withdrawal agreement in terms of the Irish backstop through Boris Johnson's proposed Internal Market Bill. During the...