Sánchez shelves tax rises until after pandemic, but says these will affect major corporations and multi-millionaires only

Sánchez shelves tax rises until after pandemic, but says these will affect major corporations and multi-millionaires only 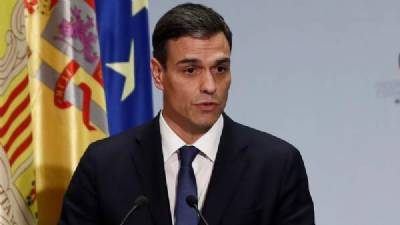 PRESIDENT Pedro Sánchez has shelved any potential tax rises until after Spain has recovered financially from the Covid-19 pandemic and economic growth has returned to levels prior to the health crisis.

“That's when we'll have the guarantees and the context we need to approach the necessary structural reforms,” the socialist leader said.

Spain is not alone in seeing its GDP plummet this year – by a whopping 18.5% so far – and it is logical this would be the case, given that the country, like most of the world, was in full lockdown from March to the end of May and all bar essential businesses forced to close their doors unless their staff could work from home.

Now, though, it appears unlikely a blanket national shutdown would happen again: Further outbreaks of Covid-19 are localised, testing and contact-tracing is taking place much more quickly, and cases are swiftly contained, meaning any lockdown would only be applied in specific towns on a temporary basis.

As a result of the State of Alarm being declared over at the end of June, employment went up in July – with 161,217 workers now back 'in the system' – although this is still a long way from mopping up the 750,000 jobs which disappeared temporarily or permanently over lockdown.

Temporary lay-offs, or 'furloughs', are already officially extended until the end of September, but the government intends to stretch them out even further in light of a rise in cases nationwide.

Pedro Sánchez has strongly hinted, though, that tax rises would not apply across the board and would be unlikely to hit the average worker or those on low incomes.

He says tax changes need to be applied 'with justice' given that 'a huge amount of people' believe they actually pay more in taxes than others who are much wealthier.

“We need a more sustainable and stable taxation structure over a longer term,” he argues.

But not just now – although the country is facing 'enormous' deficits and public debts, the country's first priority is to 'maintain companies and workers' during the pandemic.

Once the increased taxes are in place, they are expected to include an 18% levy on banks and petroleum giants – although not on petrol or other domestic fuel – plus a 5% increase on taxes on share dividends, a hike on income tax for the highest incomes, an increase of 1% on 'asset tax' for those with €10 million or more in funds or fixtures, a new anti-fraud law, levelling up the tax on diesel with that on petrol, and the creation of the so-called 'Tobin' and 'Google' taxes already approved in Parliament.

A tax on single-use plastics – to discourage their use, or at least, to encourage their recycling and becoming a circular economy – and a review of taxes charged on food will come into force.

These, once the pandemic is under control worldwide, should accelerate economic recovery more in 2021 and to an even greater extent in 2022, thanks to the 'historic' deal agreed with the European Union which will allow Spain emergency Covid funds of €750 billion, about half in loans and half in direct cash injections.

In response to the right-wing PP's criticism that the EU cash is 'a bail-out in all but name', Sánchez points out that if Spain has been 'bailed out', so have most of the other southern-European member States, and that the approach is much different now to how it was in 2012 when the then PP government acquired a €100bn bank bail-out which came with tough conditions for everyone.

The Covid funds do not involve having to force up value-added tax (IVA) for the ordinary worker or consumer, nor income tax by over a third, as before, and the 'Troika' and austerity measures are no longer in place as the EU has realised these do not work, Sánchez said after returning from Brussels.

CONSUMER affairs minister Alberto Garzón intends to ban 901 and 902 phone numbers, as well as any others which carry a higher tariff than for a call to a regional landline. Despite public pressure, many companies still...

British home-workers would like to live in Madrid, says...

WITH working from home on the rise across the modern world and given a major boost by the pandemic, the need to live close to the office is rapidly reducing – and has already been floated as a possible solution to...