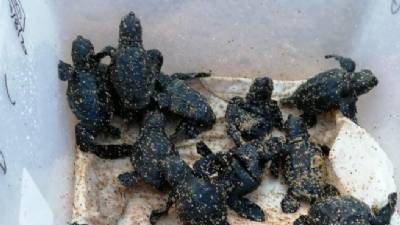 More than de 60 baby loggerhead turtles (Caretta caretta) hatched in Cala Pilar (Ciutadella) this weekend from an egg lay that the local environmental authorities were completely unaware of. The turtles were born in the sand and a large proportion of them had already made it to the sea when the nest was found.

Representatives of the Balearic Islands' Consortium for the Recuperation of Fauna (Cofib) and members of the Environment Agency went to the beach and opened the nest to check for hatchlings trapped inside, as well as to calculate the size of the lay and to take samples for genetic studies.

They found 27 live baby turtles still inside the nest which had not yet emerged onto the sand, and which, according to specialists, probably wouldn't have been able to do so without Cofib's intervention.

They also found five dead hatchlings, six nonviable eggs and a further eight viable eggs, which have been transferred to an incubator for their own safety. In total, 62 hatched eggs were found, so they estimate around 30 turtles will have made it to the sea.

According to Environment Agency officials, this turtle egg lay is the third of the season in the Balearic Islands and the second in Menorca, where last month 50 turtles hatched from a lay in Punta Prima, 36 of them on Sa Mesquida beach, making them the first turtles born in the sand in the Islands.

This is the fifth nesting site of loggerhead turtles - a species considered vulnerable - registered in the Balearic archipelago. Last year there were two lays recorded in Ibiza, and this year, as well as in Menorca, there have been egg lays registered in Cala Nova, in Santa Eulària des Riu in Ibiza.

In the event of spotting a turtle on the beach, guidelines from the Environmnent Agency require you to stay at least 15 metres away and to neither touch it nor use flash to photograph it. You should call 112 immediately so that the authorities can implement the appropriate protocol.

Similarly, they implore people to exercise precaution and prudence when publishing their find on social networks to ensure that conservation work can be carried out with the least possible pressure.

Snow joke: Thick carpet of white in León as Med basks in...

IN THE past few years, a 'blip' in the weather has brought rain and falling temperatures to Spain over the last week of August, a situation that is normally temporary and clears out the last of the humidity...

From sweltering to snowing: Four seasons in one week...

LITERALLY nobody in Spain will escape the soaring temperatures in the last full week of August, but by the weekend, some parts of the country will even be getting snow, according to State meteorological agency, AEMET....

WHEN you're based in a land-locked province, or your nearest beach is too packed, or you just want to explore the countryside, Spain is replete with natural 'swimming pools' which, at this time of year, are...