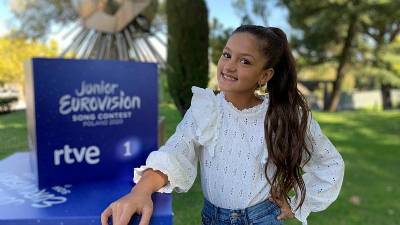 THIS year's Junior Eurovision Song Contest will go ahead as planned in November, even though the main event in May was called off due to the pandemic – and Spain has chosen its representative for the 2020 show in Warsaw.

Hosted by the Polish capital after the country's victory in 2019 with contestant Viki Gabor, the Junior Eurovision will not involve anyone travelling – even though presenters will be broadcasting live from Warsaw, the participants from the 13 countries involved will record and perform their entries on home turf.

Soleá Fernández Moreno, from Sevilla, turned nine in June, meaning she is quite a bit younger than last year's Melani García – who was 12 at the time, lives in L'Eliana, Valencia province, and came third – but music and performance is in her DNA: Soleá comes from one of Spain's most iconic flamenco families, the Farruco clan.

Almost as soon as she was old enough to speak and to walk, Soleá has shown prowess and enthusiasm for singing and dancing, and is well known in Andalucía – in fact, in 2018, she got the chance to meet her idol, pop sensation Rosario Flores, on the programme Menuda Noche, where they duetted the latter's hit single Tú Serás Mi Luz ('You'll Be My Light').

Aged just three, Soleá made her début at La Maestranza in Sevilla as part of a family flamenco show and, at four, became the star of the Christmas stage production, Navidad en Familia, at the city's Quintero Theatre.

Another Christmas extravaganza, directed and choreographed by her father Farru, had five-year-old Soleá performing centre stage on tour around Spain, and making her first TV appearance on the regional channel Canal Sur.

Last year, aged eight, Soleá was one of the special guests at a concert by the band Ketama in Sevilla, and took part in yet another Christmas theatre tour, sharing stage space with famous artists such as Pitingo and Tomatito – and her favourite singer again, Rosario Flores.

Already this year, she has featured on the latest studio album by singer Lya Manuela.

Melani García was Spain's first Junior Eurovision entry in 13 years after the country pulled out ahead of the 2007 contest, based upon the controversial views of the then management for the national radio and television broadcasting company RTVE, which considered the show was 'promoting child exploitation'.

She came third with her song Marte ('Mars'), with 212 points – 108 from the jury, who picked her as third-favourite, and 104 from the public, who chose her as their second-favourite – behind Kazakhstan and Poland.

Spain has always fared well in the Junior Eurovision – its lowest placing to date is fourth, with Dani in 2006, and it has come second twice, with Sergio in 2003 and Antonio José in 2005.

She is now 25, has recorded several studio albums, and is a model, TV presenter and owner of a shoe boutique.

Photograph of Soleá by national broadcasting company, Spanish Radio and Television (RTVE), which will present the Junior Eurovision in November

JULIO Iglesias' 'secret son' appeared on a talk show this week and admitted he and his father had once come face to face when he was in his teens. Javier Sánchez Santos, 44, from Valencia, obtained DNA from...

Shakira and Piqué kick back in the Maldives...and swim...

NOT ALL Spanish residents are holidaying at home this year – FC Barcelona midfielder Gerard Piqué and his pop-rocker partner of nine years, Shakira, have posted footage of their luxury break in the Maldives, where...