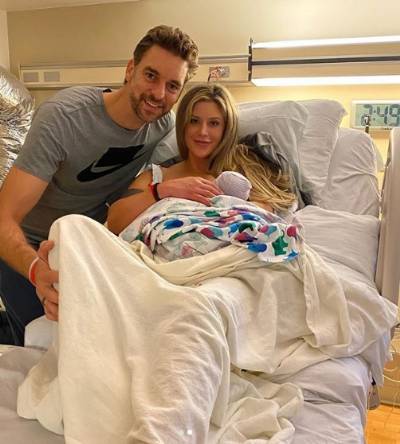 SPANISH basketball star Pau Gasol's wife has just given birth to their first child, whose name was chosen in tribute to the late NBA ace Kobe Bryant.

Gianna was Kobe's 13-year-old daughter, who perished along with him – and seven other people - in a helicopter crash on January 26 this year.

Kobe, 41, had won the NBA five times and had two Olympic golds under his belt, as well as holding numerous records.

Pau has been a rock for the widowed Vanessa Bryant and her children, close friends of the Gasol brothers, Pau and Marc – who were born in Sant Boi de Llobregat (Barcelona province) - and Vanessa is now Elisabet Gianna's godmother.

In fact, Pau spent his 40th birthday, this year, with Vanessa and the children – and, of course, a pregnant Catherine.

His Instagram profile picture shows him with an arm around Kobe and his hand on the latter's head.

“Our little girl is now with us! Everything has gone very well and we couldn't be happier,” Pau wrote on social media.

“Elisabet Gianna Gasol, a name with a great deal of meaning for our beautiful daughter.”

Pau has always referred to his deceased friend as 'Big Brother Kobe', and has been as close as family to Bryant and his wife and the children, Bianka, Natalia and Capri, who consider him their uncle.

Vanessa wrote on Instagram: “My goddaughter is here! Congratulations Pau Gasol and Cat McDonnell. Love you three so much! So touched by your request to honour my Gigi [Gianna]. Can't wait to hold Elisabet Gianna Gasol.”

DESPITE having only just unveiled its new strip for the forthcoming football season, premier league club FC Barcelona has already presented the design for its 2021-2022 shirt, and which has been met with mixed feelings...

A SPANISH national television reporter has gone down in media history for all the wrong reasons – a colleague of household name Carlos de Andrés will never live it down after forgetting to turn off his microphone...

SPANISH basketball star Pau Gasol has been a rock for the grieving family of his close friend and fellow player Kobe Bryant, who lost his life in a helicopter crash on January 26, as did his daughter Gianna, 13....

DESPITE having only just unveiled its new strip for the forthcoming football season, premier league club FC Barcelona has already presented the design for its 2021-2022 shirt, and which has been met with mixed feelings...

VOLUNTEERS are still needed for clinical trials for the Covid-19 vaccine being developed in Spain, despite the deluge of calls received by the three hospitals involved in the research. Madrid's La Paz and La...

A HANDFUL of witnesses swear they have spotted a black panther prowling around the Granada-province town of Ventas de Huelma – despite this predatory feline being native to the jungles of Central and South America....

SPANISH basketball star Pau Gasol's wife has just given birth to their first child, whose name was chosen in tribute to the late NBA ace Kobe Bryant. A smiling Catherine McDonnell, pictured from her hospital bed...

HOLIDAYMAKERS 'on the rebound' could mean the next two years are more successful than those prior to Spain's disappointing 2020, says minister for industry Reyes Maroto. As long as it is safe – in public...

A VACCINE created in Spain against tuberculosis is being tested to see whether it is effective against Covid-19, according to researchers who discovered it. 'Ruti', developed by the pharmaceutical company...