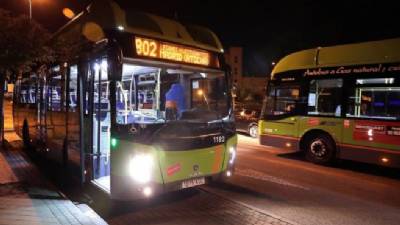 ALL night buses in the Greater Madrid region will provide à la carte stops for women and under-18s after a pilot scheme operating these on six lines proved successful.

The regional government launched 'on-demand' stops on a selection of bus connections in January, and as at the end of July, a total of 489 passengers – of whom 95% were female – had used the system.

It is likely this would have been much higher, but Spain was in lockdown for nearly three months, a situation at its most restrictive in Madrid, and only 'essential' workers or those who could not walk to the supermarket would have been using buses at all, especially after dark.

The other 5% who used the 'request-stop' facility were teens and children under 18, of both sexes.

Until now, these were only available on after-dark buses to and from the city centre and the suburbs and satellite towns of Pinto, Las Rozas, Fuenlabrada, Leganés, Parla, and Valdemoro, which – naturally – included all stop-off points within the city itself en route.

All the passenger has to do is tell the driver when they board where they want to get off, and sit as near to the front as possible.

They then use the front door of the bus to alight, rather than the 'usual' side door for scheduled stops.

At present, though, stops will only be made on request where there is a pavement available, of at least 1.5 metres (4'11”) wide, to prevent traffic accidents, and can only be made where they are actually along the route – drivers cannot make a detour to drop someone off at their front door.

But an à la carte stop means women, children and adolescents out after dark will be able to cut short their walk home after getting off, giving them greater safety.

Stops cannot be made less than five metres (16'5”) from a corner or junction, buses may not obstruct garage doors marked with a 'no-parking' sign (vado, in Spanish, which is paid for by the property owner via an annual council tax), nor pedestrian crossings, roundabouts, level crossings, cycle lanes, or any other location that could obstruct anyone on wheels or on foot or which could put bus passengers or those outside the vehicle at risk.

The system will be rolled out to all 40 bus lines that operate within the city and to and from towns of at least 10,000 inhabitants, starting from October.

Reports on the first six months of the scheme showed 'no problems or incidents', and that it had been popular within Madrid city and in and around the commuter towns of Alcorcón, Móstoles, Torrejón de Ardoz and Alcalá de Henares.

Stops on request were most likely to have been made on the lines linking the main Atocha station with Parla and Fuenlabrada, with 199 and 136 of these respectively.