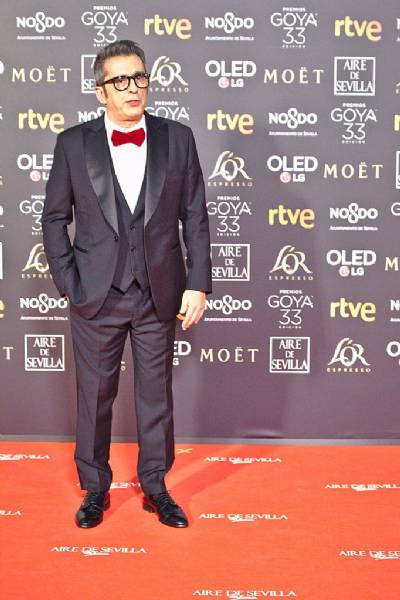 COMEDIAN and presenter Andreu Buenafuente has been awarded the National Television Award this year – and plans to donate the whole lot to charity.

He is set to receive €30,000, but says: “You can't bank the award, not if you're very aware that yours is the work of many years and many teams, and if you split it between everyone who's been involved – hundreds of people – it would be impossible.”

For this reason, he intends to donate it to various charities which, he considers, 'are very much in need and very necessary at the moment'.

When he received the call from Spain's culture and sports minister José Manuel Rodríguez Uribes to tell him he had been given this year's prize, Buenafuente called it 'exciting protocol' and said that 'funnily enough', although they did not know each other personally, they had spoken more in the last few weeks than 'ever before in their lives'.

“His call I'd consider to be a matter of protocol, but exciting protocol: Receiving an award like this fills you with responsibility,” Buenafuente admitted.

He and Uribes met for the first time at the recent Vitoria Festival in the city of the same name in the Basque Country, where the prize was presented to the comedian, who thanked Uribes for 'getting involved in his career'.

“I'm very much at peace with my profession – I quite like thinking of myself as a bit of a clown, because it's a very difficult and very noble job,” Buenafuente says.

“I love humour, because it comes in so many guises and comedy has been maturing over the years, as has the nation.

“Comedy is not just about easy laughs; there's also reflection, analysing the world you've ended up living in, and always taking a lighthearted look at it – so I wouldn't want to sound as though I think I'm an intellectual or anything. I'm more of a pathologically-restless type.”

Buenafuente recognises that paid-for TV is where he has been earning his living in the last four or five years, and that 'even though you're a bit distanced from your audience', the fact that the programme gets 'feedback' tells him how well-received it is.

“I might get things wrong three times a day, but if I get one thing right, it's really exciting, and leaving analogue TV has made things a lot calmer for me. It's a lot less stressful, and I recommend it.

“Relaxing away from a physical audience perhaps allows you to reconnect with the profession at its purest.”

The 55-year-old from Reus (Tarragona province), who has been married for the last 13 years to fellow presenter Silvia Abril, is well known on the airwaves as well as on screen, having started on his local radio station aged 17 and now presenting the Cadena SER show Nadie Sabe Nada ('Nobody Knows Anything') with Berto Romero, for which he won a Premio Ondas ('Airwaves Prize') last year.

He has worked on Catalunya regional channel TV3, as well as on Spain's third and sixth channels, Antena 3 and La Sexta, on a long string of shows including his own prime-time Sunday programme Buenas Noches y Buenafuente in 2012 – which only ran for five episodes – and since 2016 has been presenting Late Motiv, firstly on the now-defunct Canal+ and now on Movístar+.

Buenafuente has also played cameos on national films, including four of the Torrente series and the screen version of Pablo Tusset's hilarious novel Lo Mejor Que Le Puede Pasar a un Cruasán ('The Best Thing That Can Happen to a Croissant').

SPANISH films which won various Goya Awards have been nominated as pre-candidates for the 2021 edition of the Oscars – and their writers, directors, cast and crew will find out on November 3 whether they will get...

THIS year's Junior Eurovision Song Contest will go ahead as planned in November, even though the main event in May was called off due to the pandemic – and Spain has chosen its representative for the 2020 show in...

JULIO Iglesias' 'secret son' appeared on a talk show this week and admitted he and his father had once come face to face when he was in his teens. Javier Sánchez Santos, 44, from Valencia, obtained DNA from...