Sagrada Família to miss 2026 completion deadline...but after 134 years and counting, it's a small setback

Sagrada Família to miss 2026 completion deadline...but after 134 years and counting, it's a small setback 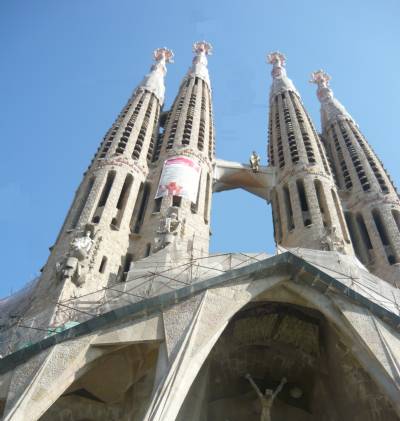 SPAIN'S longest-ever building project looks set to miss its deadline due to the pandemic, but work is still in progress and will not stop until the construction team has finished; they have already taken 134 years, so a few more are unlikely to breach planning permission terms and conditions.

Barcelona's Sagrada Família Cathedral, one of the country's top attractions – beautifully weird, tastefully wacky, beyond unique, and well worth the queues whether or not church architecture is your cup of tea (the longer you have to queue, the more time you get to spend admiring the outside free of charge) – began its journey in 1883, when the plans were rubber-stamped.

The first bricks of what was set to be the most global masterpiece of flamboyant modern architect Antoni Gaudí were laid in 1886.

Other high-profile works of Gaudí's – including Barcelona's psychedelic mosaïc-patterned Parc Güell, and the green-and-red restaurant in Comillas (Cantabria) – have long since been finished, but the Sagrada Família is still being built.

Even if Gaudí had lived a normal life expectancy, he would never have been able to see the finished result – but he was barely able to see the bare bones of it since, in a tragic and cruel twist of irony, 40 years after work started, he was run over a bus right next to his splendid cathedral-to-be and did not survive his injuries.

Since 1886, a total of nine architects have been on the job, handing over the reins to each other as they retired, and only a handful of the builders who have been involved in the Sagrada Família's construction will still be alive to see it finished, even if they all lived, or live, to a ripe old age.

However, any builder or architect seeking long-term job security or even a position for life would not need to look any further once they had been taken on for the Sagrada Família project.

The final, self-imposed deadline by the works team was the year 2026, so as to have the cathedral 100% finished by the centenary of Gaudí's death.

But the pandemic has put back some of the plans – lockdown meant only essential building work, typically that considered to be for solving structural emergencies in domestic or key commercial properties, was able to be carried out.

Also, a reduction in available funding to continue at the same pace – due to businesses forced to close temporarily, meaning they were not able or required to pay taxes, and were mostly due for State aid to help them through the shutdown – means when work does restart, it will take longer than planned.

Given that much of the funding for the works comes from the entrance charge – and given that there was practically no tourism this year and none at all during the lockdown months – the amount the Sagrada Família Constructors' Board has been able to invest in the job this year has taken a sharp nosedive.

Ticket sales in 2019 were enough to enable the Constructors' Board to budget for €100 million in works in 2020, says its leader, Esteve Camps.

Surprisingly, though, despite the pandemic apparently reducing Sagrada Família visitors to virtually nobody – especially as the cathedral was among the first non-essential public buildings to be roped off when the first few cases of Covid-19 were diagnosed in Spain – enough tickets have been sold this year to enable the Board to put aside €17m for next year's works schedule.

At 17% of last year's figure, this is small fry and will not lend itself to great progress, but the fact that €17m has been raised from visitors alone, net of the cost of overheads and staff, and bearing in mind that it is far from being an expensive tourist attraction site to get into when compared with similarly-famous ones elsewhere in Europe, the sum generated shows just how popular the continent's oddest and most inimitable cathedral actually is.

The central towers were starting to become visible from the ground in 2017, a year after building started on them, and they were expected to be finished this year 'aside from a few pinnacles', according to the current architect, Jordi Faulí i Oller.

This ship has now sailed, but it is hoped that, if work starts again in another couple of weeks, at the very least, the Mother of God Tower (Torre de la Madre de Dios, or in catalán, the Torre de la Mare de Déu, which would also translate as 'The Virgin's Tower') should be complete by some time in 2021.

After that, the Board has not dared set itself a fresh deadline, in case, but believes it will be 'impossible' to finish the cathedral by 2026, so it will be at least another seven years from now before visitors will see it without cranes, or worshippers will attend mass without sharing Communion with parked cement-mixers.

The above photograph, though, shows it without cranes, giving a taster of what it might look like some time after the year 2027.

And even if the builders miss his centenary, we expect Gaudí would have been proud of his finished piece, and would fully understand the reasons for the delays.

ORDINARY, everyday roadworks in an ordinary, everyday town in central Spain have uncovered the largest-ever Roman settlement in the country. Workmen digging up land alongside the main La Solana highway through...