Almodóvar's English short with Tilda Swinton to air in October

Almodóvar's English short with Tilda Swinton to air in October 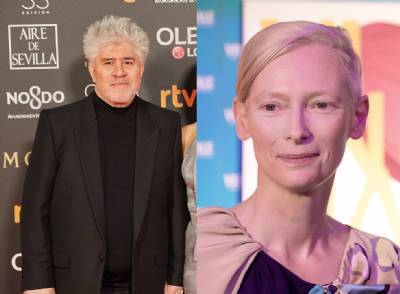 CULT film director Pedro Almodóvar's first production in English is due to hit cinemas in Spain on October 21.

The Human Voice, a 30-minute short starring British-Australian actress Tilda Swinton, is based upon a story by French author Jean Cocteau – of Les Enfants Terribles fame, and who also provided the inspiration for one of Almodóvar's most famous early melodramas, Mujeres al Borde de un Ataque de Nervios ('Women on the Verge of a Nervous Breakdown').

But the director's first film in a foreign language is radically different from Mujeres al Borde – the 1988 hit was very much a product of its time, just 13 years after dictator General Franco's death and a decade after democracy was enshrined in law through Spain's Constitution, a period of rapid social change which brought with it the end of an iron-fisted censorship on the arts, media and education.

Back then, authors, painters, singers, songwriters, scriptwriters, screen and theatre directors and journalists, who could have been jailed in the past for any works that 'questioned' public authority or the Church or were considered 'indecent', had suddenly gone mad – released from their chains, they lurched in completely the opposite direction and all that had been banned came galloping to the forefront.

Almodóvar has long been synonymous with colourful, graphically-sexual, sweary melodramas featuring homosexuals, extra-marital affairs, prostitutes, transvestites, transsexuals, and satire of politics and religion, although with the dawn of the new Millennium and a whole generation of adults around who had never lived through the dictatorship, this level of highly-ostensible free social expression was no longer an artistic necessity.

He still probes at the dark side of human emotions and the deep-seated elements of human angst with thought-provoking stories that, often, would put viewers off if they read the synopsis but turn out to be thoroughly enjoyable if they watch them anyway.

And he is frequently in the trophies – his latest feature film, Dolor y Gloria ('Pain and Glory') swept the board at the Goya Awards, and led to veteran Hollywood star and legendary 'Almodóvar Boy' Antonio Banderas' netting his first-ever Oscar nomination.

Never afraid to try something completely different, the idea for The Human Voice has aroused enormous expectations among fans of Spanish film, and in the Anglo-Saxon world.

Its only speaking part is a woman on the phone to her ex-lover whilst sitting on his packed suitcases in the home she now lives in alone with her dog – the man in question is supposed to come back for his cases, but never does, and the dog is upset because he cannot understand why one of his two owners has left him.

During the three days since the man left, the woman has only left the house once – to buy an axe and a vat of petrol. 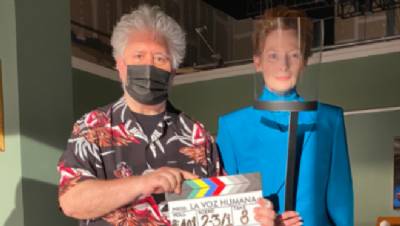 Tilda, 59, married to German-New Zealand artist Sandro Kopp – who is famous in the Scottish Highlands – is a Cambridge graduate, great-great-granddaughter of Scottish botanist John Hutton Balfour, and was a school friend of the late Lady Diana Spencer.

She and Almodóvar hit it off straight away, and the latter described her as 'open and intelligent' and 'exactly as he imagined her to be'.

Almodóvar's adaptation of the original Cocteau story is 'very free', he says, and although he wrote the script in Spanish, he had it translated into English, which is the only language Tilda uses on screen.

It is not yet clear whether the showing in Spain will be dubbed, or just subtitled, although some smaller, independent cinemas put on one-night-only sessions of foreign films in original version, or V.O., and it is likely the short will be released fairly soon afterwards in English-speaking countries.

Already, it has been shown at Venice Film Festival.

Next up, Almodóvar is working on another full-length feature film, titled Madres Paralelas ('Parallel Mothers', although the eventual English-language title may be different), starring long-standing 'Almodóvar Girl' Penélope Cruz.

Details of the plot and rest of the cast are expected to follow in the next few months.

ORDINARY, everyday roadworks in an ordinary, everyday town in central Spain have uncovered the largest-ever Roman settlement in the country. Workmen digging up land alongside the main La Solana highway through...