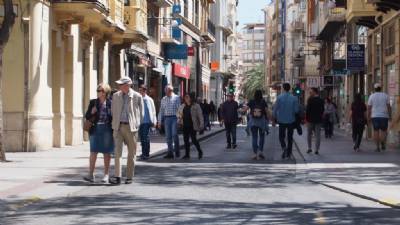 THE SAFEST large town in Spain for cyclists and pedestrians has been revealed – and it is one of 25 which fall below the European Union's yardstick for urban mobility security.

Of Spain's 88 towns and cities with 80,000 or more inhabitants, and based upon figures between 2014 and 2018 inclusive, the lowest mortality rate for those on foot or on wheels is the satellite municipality of Móstoles, just south of the city of Madrid.

It registered 0.1 deaths per 100,000 inhabitants during these five years.

In the research by MAPFRE insurance's social and humanitarian foundation, titled Horizon C3: Near-Zero Cities, the figure for Stockholm, Sweden was taken – 0.7 per 100,000 people – as it is considered a paragon of pedestrian and cyclist safety in Europe.

Over a quarter of Spain's biggest urban hubs are approximately level with, or below, Stockholm's mortality rate.

In five years, an average of 265 walkers and bikers lost their lives every year in these 88 municipalities, which the MAPFRE Foundation says is 'too high' and gives a national across-the-board figure of 1.27 per 100,000, but 25 towns and cities in nine of Spain's 17 autonomously-governed regions turned out to be safer than the Swedish capital.

The Galicia cathedral city of Santiago de Compostela (A Coruña province) had the second-lowest mortality rate at 0.21 per 100,000 residents, followed by two towns in the Greater Madrid region – San Sebastián de los Reyes (0.23) and Rivas-Vaciamadrid, which was joint third with 'Gwyneth Paltrow's town', Talavera de la Reina (Toledo province), at 0.24.

The next three were also in the Greater Madrid region, which arguably has a higher proportion of towns and cities of 80,000 or more inhabitants – Fuenlabrada, Alcalá de Henares and Torrejón de Ardoz, at 0.31 – and was followed by Elche, near Alicante airport, at 0.35, or half the figure of Stockholm, with Alcorcón (Madrid) at 0.36 concluding the top 10.

Another three were in Catalunya, all within the Barcelona metropolitan area: Cornellà de Llobregat (0.46), Santa Coloma de Gramenet (0.51) and San Cugat del Vallès (0.67).

Two are in the province of Cádiz: Jerez de la Frontera (0.56) and San Fernando (0.42), and along with Santiago de Compostela, Galicia has another entry, Pontevedra city (0.48).

Cáceres in Extremadura registered 0.63, and Oviedo in Asturias, 0.54.

In the Canary Islands, the town of Telde reported 0.39, and the second city in the Comunidad Valenciana after Elche was Torrent (Valencia province), which sits in the dead centre of the region, with 0.5.

Full figures are only available up to and including 2018, but at-a-glance statistics show that accident rates involving pedestrians and bikers, and also mortality and injuries, have been steadily declining every year, meaning the above data may actually show a less-optimistic picture than in 2020.

Whilst they are not included in the 'safest 25', the report case-studied cities and big towns such as Vitoria (Álava province, Basque Country), San Sebastián (Guipúzcoa, Basque Country), Terrassa (Barcelona province) and San Cristóbal de La Laguna (Tenerife), showing that their pedestrian and cyclist fatalities had dropped drastically in the 20 years between 1999 and 2019 thanks to concerted efforts at introducing sustainable mobility policies.

The research concluded that safety for those on foot or on bikes is not specifically linked to average income or wealth, traffic volume, or even population density – it is dictated by the presence or otherwise of cycle lanes, pedestrianised areas, sustainable urban mobility plans, and traffic-calming measures such as speed-bumps and speed limits.

These translate to either fewer cars, or slower cars, and greater use of non-motorised transport.

As an example, MAPFRE revealed how Oviedo has a vast pedestrianised zone and that the ringroad area, known as the 'Oviedo Redondo', has a speed limit of 30 kilometres per hour imposed.

Terrassa has traffic-calming systems in several neighbourhoods, as do Telde and Cáceres, which have also pedestrianised their centres.

Pontevedra and Torrent have based their town layout plans on being pedestrian-friendly, with speed cameras and 30-kilometre-per-hour limits.

Talavera de la Reina has worked on improving visibility at pedestrian crossings, whilst San Sebastián has improved its pedestrianised areas and promoted use of public transport.

Other factors, such as road safety education – especially for children and the elderly, such as teaching them when it is not safe to cross, and never to walk behind a reversing car – are key, as are setting up safe walking-to-school routes policed daily, and for cyclists and walkers to wear reflective gear.

MAPFRE says Spain's homework over the next few years should be based upon slashing pedestrian and cyclist fatalities to below 0.7 per 100,000 inhabitants and serious injuries to lower than 3.5 per 100,000, both per year; guaranteeing safe mobility for children and teenagers, the elderly and disabled; focus on preventing driver distraction and loss of skills and faculties, and developing more and better local safety plans.