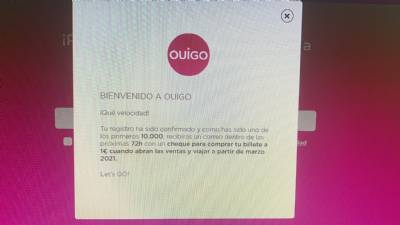 A HIGH-SPEED rail deal where the first 10,000 people to register would get a voucher for €1 that they could swap for a ticket was already sold out within half an hour – and the server crashed.

From March next year, French national rail board SNCF will be operating in Spain through its low-cost brand OuiGo, with express train seats set to come in at around 50% of those of RENFE – currently the only firm, and State-run, which provides this form of transport nationally, but which will cease to hold a monopoly from the end of 2020.

To celebrate the launch of its first connection – the Madrid-Barcelona express, which also stops in Zaragoza and Tarragona – OuiGo was offering 10,000 travel vouchers for €1 for the route, and its website was open to registration from 18.00 on Thursday evening (September 24).

Would-be passengers attempting to cash in on the deal took to social media to complain about how the site was constantly down, with a 'bad gateway' message appearing every time they tried to use it.

Others were concerned that they had registered, but not received the confirmation email.

It turned out all 10,000 tickets at €1 had been snapped up before 18.30, but OuiGo has announced online that further, similar offers will be launched at a later date.

The company told potential users to keep an eye on social media for news of future deals.

One customer, however, posted a letter on his Twitter page – Brasthforth65 – welcoming him to OuiGo and confirming he would receive an email within 72 hours containing a voucher to buy his €1 ticket 'once sales are open', to travel on the Madrid-Barcelona line from March 2021.

Brasthforth65 reassured other Twitter users that they 'need not panic' as yet.

After starting its services on Spain's busiest commuter line on March 15, OuiGo then intends to expand to provide links to other cities in Spain to and from Madrid – so far, Valencia, Alicante, Málaga, Sevilla and Córdoba.

Trains are double-decker Alstom Euroduplex, with 509 seats each, a bar carriage, and stewards on hand to attend to passengers.

2020 has been an unusual year in many respects, with most of us wondering what on earth could happen next. Well, the next peculiarity 2020 has in store for us will certainly be visible from earth, but will actually...

Regional perimeter closures: what it means for bank holiday...

As the All Saints bank holiday weekend kicks off, the Spanish government has taken steps to try to slow the second wave of coronavirus contagion by restricting movement around the country. Spain currently has over 40...