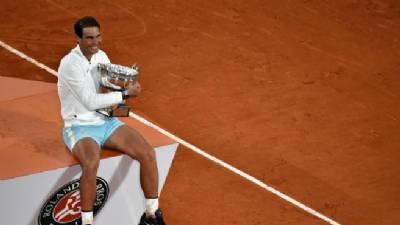 TENNIS ace Rafa Nadal may as well just keep the Paris Open trophy at home until he retires, rather than bothering to give it back every year – the Mallorca-born legend has scooped up his 13th title at the Roland Garros stadium in the French capital, and struggled to hold back his tears as the Spanish national anthem was played in his honour.

The 34-year-old from Manacor has won the tournament more times in the Open era than any other player, male or female, doubles or singles, and more than anyone in the last 100 years.

Such was his feat that even the wife of his rival, Novak Djoković, congratulated him on Twitter.

“What an amazing achievement. Congratulations to Rafael Nadal family, team and all the fans. Roland Garros champion.”

Djoković and Nadal are good friends off the court, as is often the case in tennis – a sport where rivalry starts with the first serve and ends with the last stroke, where losers congratulate their nemesis and victors comfort those they defeat.

Jelena Djoković posted a second message of support and pride, in English and Serbian, for her husband, currently world number one and who sparks fear in the hearts of his opponents whenever they face him across the net.

Novak Djoković himself has admitted Nadal is the undisputed 'King of Clay', and says he knows this for certain as he has 'suffered it in person'.

After Rafa was proclaimed the outright winner on 6-0, 6-2 and 7-5, the Serbian press is calling Djoković's defeat 'the worst of his entire career'.

With his 13th Roland Garros, Rafa has now equalled one of his other toughest rivals in Grand Slam wins – until yesterday (Sunday), Switzerland's Roger Federer held the record, with 20 titles in this category, but he now shares it with Nadal.

Retired Croatian great Goran Ivanišević was forced to eat his words after stating on Twitter that Nadal had 'no chance' against Djoković in the Paris Open final – a view that attracted him a flood of criticism.

“I thought it was Novak's year, but Rafa has shown me I was wrong,” Ivanišević admitted.

“It's very easy to play the easy card and say 'we'll see', or, 'the winner will be the best player on the day'. I said exactly what I felt.

“Obviously, what Rafa has achieved in Paris is probably the greatest feat in sporting history.”

This greatest feat has earned Rafa heartfelt congratulations from top-ranking politicians in Spain of all colours – including president Pedro Sánchez and leader of the rival PP, Pablo Casado – and even from the Royal family.

He is the only player in history to have netted five consecutive titles – the only ones who come near that, with an unbroken run of four, are French players Jeanne Matthey, Suzanne Lenglen and Paul Aymé, and Sweden's Björn Borg.

Only one player has beaten Nadal outright on number of titles – France's Max Decugis, who won every year from 1902 to 1914 inclusive and again a century ago in 1920, in the doubles, giving him a total of 14, but nobody has managed this in the Open era, only Decugis in the pre-Open era, and nobody other than Nadal has ever managed it in the singles.