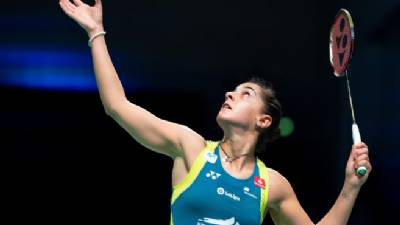 BADMINTON whizz-kid Carolina Marín is back, and with a bang – the world's top woman in the history of her sport walked her victory in round one of the Danish Open this morning (Tuesday), having grappled with one of the toughest years in her personal life.

The Huelva-born Olympic gold medallist and reigning world champion, 26, had only just got back in play after a snapped ligament in her knee had her limping off the court halfway through the final of the Indonesian Open in January 2019, when the Covid-19 pandemic shut down the sports circuit for nearly the whole of the 2020 season.

Restarting last September with the Vietnam Open, Carolina's last match was at the British Open in March, against Taiwan's Ying Tai – followed by seven months with no dates at all anywhere in the world due to the virus.

She had already been concerned that her injury would mean she was not at the peak of her fitness and ability in time for the Tokyo 2020 Olympics, although for this reason, she may have benefited from the fact the Games will not now take place until summer 2021.

And her knee surgery and forced nine months off, followed by the disruption to the badminton schedule caused by the pandemic, had felt like the end of the world to Carolina, she recently admitted – but all this turned out to be small fry.

Just before her career came to an abrupt halt, her father, Gonzalo Marín – a stationery distributor – suffered a serious fall at work which left him in hospital with head injuries and, in May, Carolina said she had been through the 'worst months of her life'.

She was wrong, though, because the 'worst months' were still waiting in the wings: In July, her father passed away after his injuries worsened.

Being able to return to the court is helping distract her from her grief, and beating Russia's Natalia Perminova 21-7 21-15 in a two-set match in Odense, Denmark, which was over in a flash – it took her just 28 minutes to clinch her victory – provided a much-needed lift for Carolina's flagging spirits.

“At last, after nearly seven months,” she said after her win against Perminova.

“First match won...many thanks to everyone for your support, and I'm looking forward to getting back onto the court. Let's go!”

Carolina now goes forward to the second round, on Thursday, where her rival is not yet confirmed, but will definitely be called Line.

The winner of the 'Danish derby' between compatriots Line Horjmark Kjærsfeldt and Line Christophersen will play Carolina in two days' time.