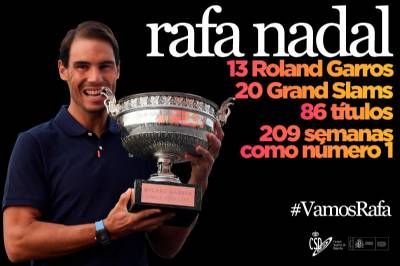 BEYOND even the Princess of Asturias Award – Spain's answer to what would be a Nobel Prize for Sport – the Great Cross of the Royal Order for Sporting Merit is every athlete's or player's Holy Grail, and only a handful ever achieve it. It's not automatically presented every year, being completely discretionary and exceptional, and anyone who receives it is henceforth addressed as His or Her Excellency when it comes to official protocol.

And there are no prizes for guessing who has been granted it this week.

“I've left for the end [of the Parliamentary session] the announcement that gives this Council of Ministers, and me, as spokeswoman, the greatest pleasure – that I have just granted the Great Cross of the Royal Order for Sporting Merit to our tennis player Rafael Nadal,” said treasury minister María Jesús Montero last night (Tuesday).

“I don't think we need to describe this sportsman's CV – this person who is in a class of his own on and off the court.”

Nadal, 34, made history this week by clinching his 13th Paris Open title at the French capital's Roland Garros stadium, the most wins at this famous tournament since the dawn of the Open era, the most in exactly a century, the most in singles, and he is so far the only player since its creation in 1891 to have won the singles title five times on the trot, scooping up the trophy that apparently permanently lives on his shelf every year from 2010 to 2014 inclusive.

Jointly with Swiss superstar Roger Federer, Rafael Nadal has won 20 Grand Slam titles in his career, and has been ATP world number one on various occasions in three different decades – the 2000s, the 2010s, and more recently, the 2020s.

Only one player has ever won more Roland Garros titles than Rafa Nadal – France's Max Decugis, who netted it 14 times between 1902 and 1920, albeit in doubles rather than singles.

Two more French Open titles would make Nadal the player with the most wins since the tournament was created in 1891.

As it is, he already has 86 titles and two Olympic gold medals to his name, and has spent a total of 209 weeks of his career as world number one.

The government's sports department said on Twitter: “If anyone deserves the Order of Sporting Merit, it's you, Rafael Nadal. You're a piece of history and a source of pride for your country.”

María Jesús Montero said: “It's an honour for us to hand over this distinction, not just for the indubitable sporting merits of one of our best sports persons in history – not only in Spain but on an international level – but it also gives us pleasure to grant it to someone who represents the values, and the influence over the young, and everything else that makes us better people.”

Examples of the very clear, not-hard-to-find human side of Nadal include his bailing out mud from homes with his bare hands after floods devastated his home island of Mallorca, setting up emergency beds in his eponymous tennis academy for the evacuees, donating tablets to deprived children so they did not miss out on their education during lockdown when schools shut, being pictured on his hands and knees scrubbing his own gym equipment, and running a charitable foundation – chaired by his mum, Ana Parera, and managed by his wife, Mery Perelló – which has invested heavily in supporting kids from poor families in Mallorca and Valencia.

And fame and fortune is something that has never gone to Nadal's head – quite the opposite, given his unstarry life history.

Other than when he is on tour, neither Rafa nor his wife have ever lived anywhere else in their lives besides Manacor, Mallorca – although Mery spent a few years down the road in Palma studying business and economics at university and working in PR for Endesa electricity and as office manager for MAPFRE insurance – and the pair have never been in any other relationship in their lives.

Rafa was 17 and Mery, a school friend of the former's sister Maribel, was 14 when they met; they started going out two years later, and have been together ever since.

Their wedding a year ago in Manacor came as a surprise to everyone, since it had seemed they were in no particular hurry.

Rafael is one of a small handful of sportsmen who hold the Great Cross and are addressed as 'His Excellency' – along with canoeist David Cal, cyclist Joan Llaneras, and footballers Xavi Hernández, Iker Casillas and Andrés Iniesta.

The above picture is by the ministry of sports, media and culture (CSD) on Twitter (@deportegob).