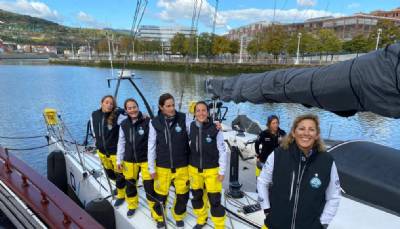 A MARINE biologist and cancer survivor from Teruel will sail the long way round from Bilbao to Barcelona to 'send out a message of hope' for others in her situation.

Nuria Gómez will join four other women who have all had breast cancer and lived to tell the tale on a 15-day trek along the Cantabrian Sea, Atlantic Ocean and western Mediterranean in a 72-foot yacht, covering 1,530 nautical miles (2,834 kilometres, or 1,761 'land' miles) to 'show there is life after illness'.

“Four years ago, the story of five women who had got through cancer attempting to cross the Atlantic on a yacht made me get up off my sofa – and my aim is the same, that of inspiring and helping someone else in that situation to feel the way it made me feel: That life does indeed go on and that you'll be able to carry on doing extraordinary things,” said Nuria, 44, in an interview with her regional newspaper El Heraldo de Aragón.

She will be part of the sixth edition of the Pelayo Vida Challenge, one of five women aged between 38 and 56 who have all been through the same ordeal, crewing a V70 yacht left over from the world's toughest regatta, the Volvo Ocean Race.

Their 'Vuelta a España', or 'Tour de Spain' by sea, is aimed at 'not only lending visibility to cancer, but to highlighting the importance of practising sport as part of your recovery', the scientist explains.

Others on the team are Marián Cáliz, from Elche (southern Alicante province), Lorena Madrid, from Cartagena (on the coast of the Murcia Region), Fátima Domínguez from Jerez de la Frontera (Cádiz province), and María Aldama from Bilbao (Basque Country).

“I remember that moment when they diagnosed me with cancer, and they were carrying out tests to find out the extent of it,” Nuria reveals.

“I was on the sofa in my parents' house, feeling lost and terrified, because that day they had carried out a test on me and I couldn't be around children for another 24 hours; at that moment, one of my daughters was just a few months old and the other was six years old.

“It was then that I read about these five women in the newspaper. It was the Pelayo Vida Transatlantic Challenge 2016. My head suddenly went 'click'; I looked at my parents, and I said to them: 'One day, that'll be me'. And it's become reality – it's actually going to be me.”

And it'll be tough on them all, even though they won't be crossing the Atlantic like the women in 2016, reveals Nuria.

“We won't just have to grapple with exhaustion – given that we'll be working flat-out on deck, three hours on, three hours off, during the 15 days of the crossing – but also, we'll have to deal with the sea conditions. That's what I'm most apprehensive about; until I started training for it, I'd only ever been on a yacht for pleasure, as a passenger.

“As soon as lockdown was over and I found out I was on the shortlist, I started training. We all did sport every day – and even though I've always practised sports, including tennis and skiing [Teruel province is home to two of Spain's best-loved ski resorts], it had never been part of my routine. 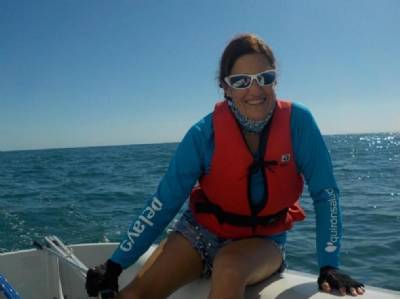 “But when cancer arrived on the scene and I asked my oncologist what I should do to increase my chances of survival and cure, she said to eat a balanced diet and to exercise. I wanted to be proactive in beating the illness, so I bought myself a pair of trainers, started going walking, and went from hiking half a kilometre on the first day to running seven kilometres in one hit within the year. A huge achievement for me, which motivated me and made me believe in myself.

“Nowadays, sports is just another part of my daily routine, although in the last few months, that routine has become more intense. We've all focused on increasing our upper-body strength, since on a boat, you use your shoulders, arms and back a lot. We've been going to the gym where we could, or exercising at home where we couldn't, as well as cycling and swimming.

“We need to be as fit as possible, because it's going to be really tough.”

Nuria also had to study hard.

“I had to go to Valencia to take sailing classes from scratch since, although I'm a marine biologist, the theory and practice of yachting is highly technical and you have to bear in mind that, once you've started the challenge, the actions needed are very swift and you need to know exactly what you're doing.

“We were also given 'homework'. We started off on a lightweight yacht, but were told it was really important to spend a night on board, because it all changes hugely in the dark – and that turned out to be true. I spent 48 hours training myself for this new sensation in the Columbretes Islands.

“Additionally, you have to get used to the feeling of the waves moving, because at night, you can't see land to guide you. That was really an intensive experience: No noise, surrounded by stars. I'd never felt that before and I highly recommend it.”

The V70 yacht is 'very sporting and very technical', and designed for 'extreme regattas', meaning the women will need to take an experienced crew with them – another seven people, giving a total of 12 on board, four of whom are professionals, including London 2012 Olympic gold medallist Ángela Pumariega.

Working as a team is one of the parts Nuria is most looking forward to.

“When one of you falls down, another picks you up; when you're a yachting crew, you have to work as one, and I'm sure this will be a highly-enriching personal experience,” she admits.

“Although I'm already feeling this personal enrichment, since the challenge has not only forced me out of the shell I had crawled into with my illness, but, as my family and friends tell me, this is a challenge just made for me – as my professional life shows, I'm passionate about the sea, so sailing feels like a dream, a gift.

“And now I'm only focusing on the fact that life had kept this surprise waiting in store for me.”

Photograph of the complete team by the Pelayo Vida Challenge