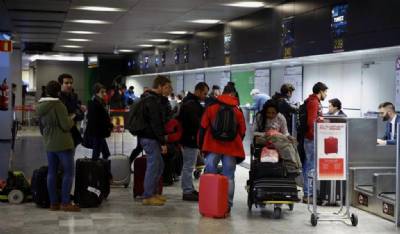 TOURISM authorities in Spain have praised the EU's new regional system of 'colours' indicating contagion levels to help travellers make decisions before setting off, and has called for PCR tests at departure point and arrival instead of random quarantining.

Perhaps unfortunately for Spain, the fact that colours are given by complete regions means over half the country is on darkest red at present and the rest on light red, with only the Canary Islands and Galicia on orange – but it should be borne in mind that in terms of driving time, an autonomous region in Spain can take several hours to cross in any direction and the differences between towns and districts is enormous.

Very dark red means more than 240 cases per 100,000 inhabitants, or where Covid-19 'positives' make up at least 0.24% of the population, and this is the case for the regions of Murcia, Madrid, Aragón, Castilla-La Mancha, Castilla y León, the Basque Country, Navarra, and La Rioja.

Other areas on very dark red include Belgium, the far northern tip of France opposite the UK Channel port of Dover, south-eastern France, Northern Ireland, and the northern half of England, whilst the whole of southern and eastern England is on pale orange.

Dark yellow – 20 to 59.9 cases per 100,000 – is rarer still, but includes most of Portugal except the northern 20%, the Algarve and the Lisbon metropolitan area, parts of Wales, most of Italy including Sicily, most of Germany, over half of Poland, northern Greece, Cyprus, most of Sweden, and southern Finland and southern Norway, among others.

A few areas are coloured in pale yellow, meaning fewer than 20 cases per 100,000 inhabitants, and include most of Norway, Scotland, Finland, northern Germany as far as the Danish border, the 'toe' if Italy, most of Greece, and the Portuguese islands of Madeira and the Azores.

Only the Danish-owned peninsula of Greenland is showing in pale blue, or 'no reported cases'.

The map only includes European Union countries in addition to Norway, Iceland (on pale red), Liechtenstein and the UK, but Switzerland, Turkey and much of the former Yugoslavia are excluded from the colour scheme.

Despite Spain's 'incriminating' colours, variations within regions are huge – the Comunidad Valenciana is about the size of Wales and Andalucía is around twice this area, whilst Murcia is around the same land mass as two standard UK counties.

Contagion levels in Spanish regions are tending to be higher in the biggest cities, skewing the figures for towns out in the provinces, where it is common to find entire administrative districts, comarcas or 'mini-counties' where the total number of cases averages about one or two per town, barely reaching treble figures and sometimes below 50 within a radius of 30 or 40 kilometres.

But it would not be feasible for the EU to show country colours in this much detail, even if individual countries, regions or districts themselves do so, meaning anyone from beyond national borders will not see the full picture.

Minister of industry and tourism Reyes Maroto says the new 'colour map' is 'a first step towards reactivating international tourism', since it 'covers proportional and predictable measures that increase travellers' confidence'.

After all, it would not make sense for foreign governments to apply blanket restrictions to Spain based upon the number of cases in severely-affected regions such as Madrid.

An estimated three or four in 10 of Spain's cases are in the wider Madrid area, meaning the national rate of 296 'positives' per 100,000 inhabitants (0.296% of the population) is only a rough indication.

In almost every region, dozens of towns have never had a single case, and dozens more have not had any since the summer or even farther back.

Reyes Maroto says her department agrees with the EU's new strategy of encouraging Covid-19 tests being carried out ahead of travel and upon arrival, rather than applying blanket quarantine to travellers from a specific country, as remains the case with those journeying from Spain to the UK.

Even if they can show negative PCR results from just before travel, and even if they are tested upon entering Britain and are able to prove they are negative, anyone arriving in the UK from anywhere in Spain is automatically required by the British government to self-isolate for 14 days.

This includes British residents returning from holiday in Spain.

But these travellers do not have to stay in an empty hotel room or accommodation, only at one address, where they can go out into the garden, but not the street.

They are permitted to stay with friends or family, as long as they remain at the same address, and nobody else living or staying at that address is required to quarantine unless they were travelling with the person who had been in Spain for all or part of the journey before reaching the UK.

Each country is expected to apply its own restrictions as it sees fit, but a continent-wide agreement means that only those from 'orange' or 'red' zones will be subject to these.

Quarantine does not apply to anyone travelling from a 'hot zone' if they are cross-border transport workers, need to move between regions as part of their jobs – such as reporters and diplomats – students where their movement is essential to their course or education, travellers on connecting flights that require a stop-off in a 'red' or 'orange' area, patients needing to travel for medical reasons, or anyone on the move for 'essential family or business reasons'.

On 'green' by Christmas

Spain's government wants the whole country to be on 'green' on the EU's 'traffic light' system – fewer than 25 cases per 100,000 inhabitants (0.025% of the population) and with no more than 4% of tests showing positive – by Christmas, to prevent families being kept apart over the festive season.

Also, Madrid's regional government wants the capital on 'green' by mid-December so city residents whose families live elsewhere in the country or the world do not have to spend Christmas alone, and so that bars, restaurants and shops enjoy a bumper season in business terms.

At present, negotiations are ongoing between Madrid's regional government and Spain's national authorities over restrictions to be applied in the capital and wider metropolitan area.

Deputy regional president for Madrid, Ignacio Aguado, says now the EU's 'colour map' has been introduced, all town councils, autonomous governments, the central government, and 'now Europe, too', should be working towards increasing 'green zones' in time for Christmas for 'financial or economic' and 'psychological or family' reasons as well as for public health motives.

TREE-LINED, lush, green and on the edge of the Sant Llorenç del Munt i Serra de l'Obac nature reserve, Matadepera is home to just 10,000 people, 30 kilometres from Barcelona, about 10 kilometres from Sabadell and...

Influencers' favourite 20 sites in the Comunidad...

EVERY region has its 'day' in Spain, some with more pomp and circumstance than others, and pretty much all of which are bank holidays in the territory they pay tribute to – unless they land on a Sunday, when...

PROBABLY not the best place to live if you suffer from vertigo, but ideal if you want an unrivalled view from your lounge window, taking a wrong turning out of Castellfollit de la Roca could be the last mistake...

New work-from-home law comes into force: What it means for...

SPAIN'S long-awaited new legislation covering home-working employees has come into force, and answers some of the questions businesses and their staff had been asking – but remains fairly flexible overall. Key to...