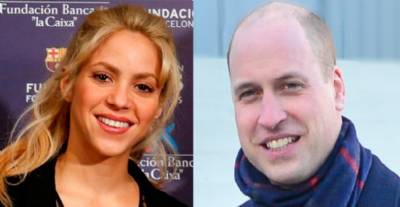 BARCELONA'S most international resident and British royalty have been chatting over a cup of tea about the state of the planet and how to save it.

Pop-rocker Shakira, who lives with and has two children with FC Barcelona midfielder Gerard Piqué, is on the team set up by Prince William, Duke of Cambridge, focusing on his newly-launched Earthshot Award - £50 million (about €55m) in total as grants towards at least 50 solutions to the biggest environmental problems worldwide brought into effect in time for the year 2030.

The grandson of Queen Elizabeth II of Great Britain said in a recent interview that 'the next 10 years are critical for bringing about change' in halting global warming and other planetary crises.

These include, for example, plastic pollution in the sea: If, as horrifying predictions claim, there is more plastic in the sea than fish by the year 2050, the ecosystems of the world's oceans will be under serious threat; and as they are responsible for between 60% and 80% of the Earth's oxygen, such major damage to the seas would literally mean everyone on the planet gasping and wheezing.

Luckily, Prince William's Earthshot Award Council are not only raising awareness through their celebrity status, but are educating the next generation at home.

“I think [climate change] is something that everyone needs to become aware of; every child, in every school, every teacher,” said Shakira, 43.

Her own two boys are 'very conscious' about caring for the environment, the singer-songwriter and musician explains.

“My eldest, Milan [aged seven] started asking questions about the climate crisis when he was just five, and now, he tries hard not to waste available resources,” Shakira told the Duke of Cambridge.

Also, her youngest son Sasha, five, 'tries to pick up all the rubbish' he finds on the streets in Barcelona to dump in the requisite recycling bank.

Asked by HRH William if she believes a change in attitude vis à vis climate change issues is likely in time to save the planet within 10 years, Shakira replied that 'we have to be optimistic' about it.

“I believe in the determination, strength and intelligence of humanity,” she said.

“If we can put a man on the moon, I'm sure we can achieve this.

“We've got the resources, the technology, to solve our everyday problems, after all.”

It was this conviction that led Shakira to decide to join the Earthshot Award Council, which she hopes will 'inspire future generations'.

Another 'honorary Spaniard' on the Council is Dani Alves, the Brazilian defender for São Paulo FC who played for Sevilla from 2003 to 2008 and Barça from 2008 to 2016, before moving to Juventus and then Paris Saint-Germain.

Nominees for the award will be revealed on November 1, and a prizegiving will be staged every year in a different city – as expected, given who created it, the first of these will be London.

The brand-new Earthshot Award ceremony will be in autumn 2021.

World's smallest (and most unusual) beach is in Asturias

HAVE you noticed anything strange about the beach in this picture? At first glance, the more observant of you may have thought it was a lake, or inland beach, perhaps man-made. But no – it's actually right on the...

October on the beach? Temperatures to hit the 30s this week

HURRICANE Alex has moved on after battering Spain on its journey north-west towards the UK, and most of the country is now set to enjoy an 'Indian summer', according to the met office. Temperatures on the...