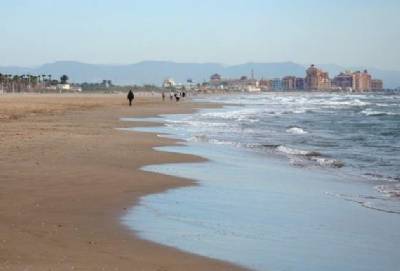 THE MAJORITY of Spain's coastal regions are considered 'low' or 'moderate' risk for Covid-19 contagion and will escape heavy restrictions proposed for territories which come under 'high' or 'extreme' risk areas.

Based upon a 'traffic light' system, red or 'extreme' covers Aragón, the Greater Madrid region, La Rioja, Castilla y León, and the Spanish-owned enclave of Ceuta on the northern African coast, directly across the Strait of Gibraltar.

Orange or 'high risk' includes the latter's neighbour Melilla – closer to the Algerian border – Navarra, the Basque Country, Castilla-La Mancha, Catalunya and, for the moment, the Murcia Region.

Whilst only two regions are on green, or 'low risk' – Galicia and Cantabria – at least half the Canary Islands is expected to be moved onto this level in the next few days and will also form part of the European Union's 'green' countries on its 'safe travel' map.

No 'blanket' national lockdown is expected in the near future, since this was an emergency measure taken when fast action was needed at the beginning of the year, it would not make sense to confine areas with no or hardly any cases just because other zones are badly affected, and the World Health Organisation (WHO) has stressed that any form of movement restriction should be a 'last resort' due to the potential long-term harm it could cause to local and national economies and psychologically for residents.

For this reason, Spain and other national governments are seeking very localised solutions.

On Spanish soil, the criteria are based not just upon the epidemiological situation, but also on the capacity of the health services to respond to, treat and test patients or their contacts, the level of vulnerability of the population, and the ability or otherwise of adopting prevention and control measures.

This is one reason why some more rural parts of the country are placed on high-risk or extreme-risk levels, even where contagion rate is not excessive: They are typically home to a much older demographic who would be in greater danger if they caught the virus.

Other criteria used for safety measures will include the level of repeat contagion – those who have recovered from Covid-19 and caught it again – the number, trend and speed of change in cases diagnosed in the last week or fortnight, the proportion of cases associated with an 'outbreak', defined as where a cluster of people all become infected at once from the same source, and the existence of 'hotspots' – high outbreak incidence, limited control, or health or care centres affected, for example.

Blanket measures are more likely to be taken for large towns and cities affected, where these have over 100,000 inhabitants, but the government's new strategy allows for very specific, individual approaches for much smaller towns, especially villages of approximately 5,000 inhabitants or fewer.

One example of this was the inland southern Valencia province village of Barx de la Valldigna which, with a contagion rate of nearly 3% of the population, putting it well above the requisite 500 cases per 100,000 inhabitants, or 0.5% - but as the actual number of 'positives' was only five in a village of 169 residents, the situation was not considered serious enough to take drastic steps. 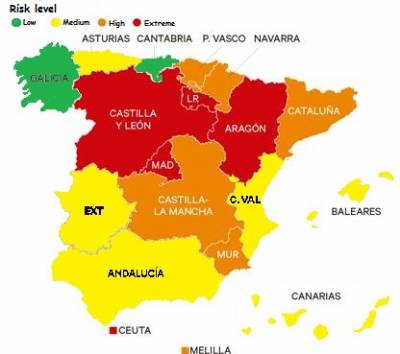 Now, Barx de la Valldigna does not have any cases at all, since all five have recovered.

Even in health departments with 50 or 100 'positives', their district hospitals typically only have about two to four patients admitted and rarely more than two in intensive care, if any – but the situation differs radically across the country, and even from town to town.

Nationwide, groups meeting in public or in private homes are limited to 10 and smoking in public places is not allowed unless a distance of at least two metres is maintained between the smoker and the nearest other person, even if that other person also has a cigarette.

Where the region in question is of a higher risk, restrictions are greater – limited to six people in 'red' and 'orange' zones.

Whilst shops in high-risk regions are required to reduce their customer numbers on the premises to 25% of the total capacity and to close the insides of bars and restaurants, with outside terraces a maximum of 50% full, 'extreme-risk' regions may be ordered into a temporary shutdown for a few days or weeks if the situation worsens.

Other than Murcia, Ceuta and Catalunya, none of the bars, restaurants or shops in Spain's coastal regions are required to close their inside areas, and the standard 50% capacity inside and on outside terraces already in place is likely to apply.

The measures in the majority of coastal regions could involve buses, trains – including underground railway networks – and planes being restricted to 60% capacity, and taxis to no more than two passengers.

Where contagion rates are at the upper end of the 'yellow risk' scale, town councils may be required to set aside a 'priority' time slot for the over-70s to go out for their walks.

As yet, no restrictions have been applied across the coastal regions on 'yellow', except in certain very localised hubs of towns where outbreaks of social origin have been detected.

The ministry of health's published restrictions are only a proposal at the moment, and will not apply to an entire region, only to towns which fall within a given risk category.

In the coastal regions on 'yellow', with the exception of certain 'hotspots', the vast majority of towns are operating as normal, with the only differences to pre-pandemic life being compulsory mask-wearing, hand-sanitiser at the entrance to trade premises, and a concerted effort on the public's part to maintain a distance from others.

Also, many towns in these regions which have experienced sudden spikes in cases in the past few months have responded so swiftly that numbers dropped significantly within a week or two, frequently down to zero.

Many towns, especially smaller ones, have not had any cases at all since early summer, and many others have never had a single 'positive' among their residents all year.