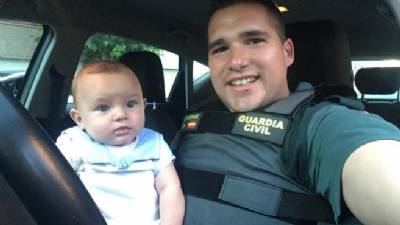 AN OFF-DUTY Guardia Civil officer saved the life of a six-month-old baby in a park in the Greater Madrid-region town of Leganés.

The infant had gone into cardiac arrest – his heart and breathing had stopped – and, even where resuscitation is successful, the mortality rate for victims is extremely high.

But as the photograph (left, provided by the Guardia Civil) shows, little Izan is now in perfect health.

Christian Ríos, who is based at the station in Las Rozas, had finished his shift on Sunday evening and was hanging out with friends in the park.

At around 20.00, he heard panicked screams from the baby's mother and rushed to her aid.

Finding the child unconscious and with no pulse, he immediately began performing CPR and rang for emergency services.

Christian kept going until the baby came round, and stayed with him to ensure he remained stable until paramedics arrived.

According to healthcare staff, the cardiac arrest was a case of 'sudden death in lactating infants', given that the baby had no other health conditions whatsoever at the time.

Christian has met Izan again since his heroic deed, and posed for the above photograph with him.

The Guardia Civil says on its Twitter page that Christian and Izan are 'now friends for life'.