KING Felipe's niece Victoria Federica has been spotted on summer holidays in Jávea with new boyfriend, Jorge Bárcenas – a DJ who is no blood relation to disgraced former PP treasurer Luis Bárcenas, currently in jail.

The daughter of the Infanta Elena, now 19 – her 20th birthday is in September – has just finished the first year of her degree in business administration at the prestigious US-run College for International Studies, in Madrid.

She is no longer officially a 'Royal' after King Felipe stood both his sisters down when the Infanta Cristina was investigated in connection with her husband, Iñaki Urdangarín's multi-million money-laundering racket – which has landed him in prison, whilst the rest of his family lives in Geneva, Switzerland – and, as the monarch did not want to be seen as pointing the finger, he framed it as a 'slimming-down' of the dynasty in order to contain costs during a time of financial crisis.

But although Iñaki and Cristina lost their titles of Duke and Duchess of Palma, Elena retains hers, that of Duchess of Lugo.

No Duke of Lugo exists now, since Elena Borbón divorced the father of her children, Jaime de Marichalar, in 2009.

When lockdown was declared, the Infanta Elena's son Froilán, 21, was staying with a friend in Málaga and had to remain there, whilst Victoria Federica was living with Jorge Bárcenas on a private estate in Jaén, and had friends staying with them.

If the Infanta thought she might be reunited with her daughter once travel between provinces was allowed again, she was mistaken, since DJ Bárcenas and Victoria Federica headed straight to Jávea (Alicante province) for their first holiday together. 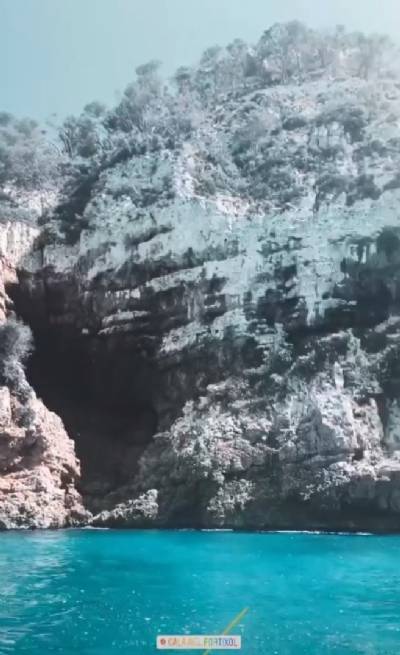 The exact location of their rented villa – although they could be staying in a hotel or apartment, this seems unlikely – is not known, but Bárcenas' Instagram story showing them both staked out on the cover of a yacht on the Mediterranean means they are almost certain to be living the high life.

Also, the young aristocrat and her new beau have posted pictures of themselves sunbathing in Portitxol Bay, also known as the Barraca Cove, a favourite site for celebrities given that it is unspoilt, secluded, shrouded by high cliffs, and full of character, with its blue-and-white fishermen's bungalows.

DJ Bárcenas is a fairly regular visitor to Jávea, having taken a holiday there with a group of friends in 2018 and working at several fiestas last summer.

The couple was first seen together at a New Year's Eve party in Baqueira Beret (Lleida province, Catalunya), a popular ski resort where, curiously, Luis Bárcenas has a ski lodge – although this was embargoed when he was investigated as part of a long-running cash-in-hand bribery network involving the right-wing PP party at national government level.

But Luis' son Willy Bárcenas, vocalist and front-man for the band Taburete, has been quick to deny any blood relations between himself and the DJ known as 'Barce', despite the fact they share both surname and profession.

As for Victoria Federica, she was romantically-linked to bullfighter Gonzalo Caballero last year, and suffered greatly when he was left in intensive care in an induced coma and on a ventilator following a goring in the ring.

King and Queen celebrate end of lockdown with official...

KING Felipe and Queen Letizia arrived in Gran Canaria today (Tuesday) – their first official trip since before lockdown – to 'transmit the message' to people in Spain that they 'can now safely travel...