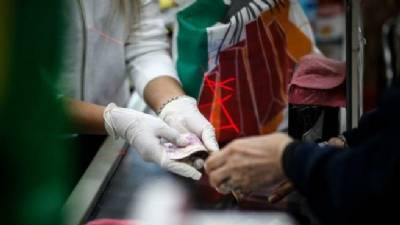 FOR THE first time in the history of credit and debit cards, plastic has overtaken cash as a method of payment in Spain, according to marketing consultancy Nielsen.

At the beginning of this year, the Central European Bank (BCE) reported that 87% of people in Spain still used cash rather than cards for their daily purchases, and that in the Eurozone as a whole, 79% of transactions and 54% of the total amount spent involved notes and coins.

Also across the Eurozone, the average cash transaction as at the beginning of 2020 was €12.38, whilst the average transaction using any payment method at all was €18.10, and around two-thirds of purchases came to less than €15.

Those who avoided cash altogether if they could, and those who used cash for absolutely everything, both accounted for around a quarter of the total each, with the remaining 50% being somewhere in between along a scale ranging from 'mostly cash' to 'rarely cash'.

But this has changed in Spain since the country went into lockdown on March 15, a situation it only came out of at the end of June.

Around the time lockdown was declared, those traders and other services considered 'essential' and permitted, or actually required, to stay open were strongly encouraged to accept mobile phone, SmartWatch, or card payments, particularly contactless, since it meant not having to touch items that had been handled by another person and which could, it was suspected, pass on the SARS-CoV-2 virus.

As a result, even the smallest of local bars in Spain are now tending to allow customers to pay by card just for one cup of coffee, whereas before, many did not even have a card machine at all and a large percentage of those who did set a lower limit of around €5 to €10.

According to Ángeles Zabaleta, sales director of Nielsen Spain, card payments on the high street now exceed cash transactions because customers are concerned about catching the virus and feel safer not having to touch coins and notes that have been through multiple hands.

“There's a greater sense of safety,” she says, “although we also need to bear in mind that there's been a rise in larger purchases, which have historically been those most likely to be made by card.”

Ángeles Zabaleta says the fact that cash is more often used for smaller amounts and cards for larger sums has long been the case and has not changed, but since the Covid-19 crisis hit Spain in mid-March, people are tending to go out shopping less often – although when they do, they buy more, 'filling their trolleys to the limits'.

During lockdown, the number of trips to the shops fell by 13%, but the amount spent on these trips rose by 20%.

This said, the increase may also have been due to the fact that, in the early days of lockdown and just before it was confirmed, consumer stockpiling meant anyone who headed to the supermarket after the first couple of hours of the day was limited to what was left on the shelves – frequently the most expensive versions, as own-brand products had largely sold out.

This was despite reiterated reassurances from grocery chains that there was no danger of a national shortage of any items, as producers, suppliers and delivery drivers were still working in full.

Sra Zabaleta says shop visit had fallen to those typically seen in August – a month when much of Spain 'shuts' or reduces its hours and when a high number of workers take their annual holidays – but the volume of purchases was more typical of those seen at Christmas.

Even though lockdown finished before July – with only localised restrictions in a handful of parts of the country where isolated outbreaks of Covid-19 have been reported – consumer habits have not yet changed back to where they were before, and it could be that, until there is no longer a threat of a future lockdown, they will not revert back to old routines.

Visits to cashpoints have already, according to the Bank of Spain and the BCE, fallen in recent years – the former says only 50,000 of these now remain in the country and tend to be used only for large withdrawals or for other purposes such as paying bills using a barcode, contracting loans and other products, checking balance, mobile phone top-ups and buying concert tickets – but during lockdown, even though cashpoint visits were allowed among the few 'excuses' for leaving home, even fewer withdrawals were made.

This was partly because of a conscious desire to avoid cash, and partly because residents wanted to avoid leaving the house at all unless it was absolutely impossible not to and were keen to get back indoors as quickly as they could, meaning ATM visits fell off the agenda when a debit card could be used instead.

In fact, Nielsen reveals that for every €3 spent in lockdown, only €1 was paid in cash and the other €2 by card or phone.

PIN number entry in card machines fell drastically, since Spanish banks began to up the limits above which these are required – typically €20 before the pandemic.

But during lockdown, many adults of pension age changed their habits overnight, she says – card payments made by those aged 65 and above rose by 13 percentage points.

Despite all this, Spain is not going to become a completely cashless society – at least not for another generation or two.

Proposals made last month by Spain's socialist MPs, who make up the bulk of the nation's coalition government, to scrap coins and notes were swiftly squashed by the BCE, which said this would be in breach of the EU Treaty provisions stating that euro notes and coins are always legal tender.

In fact, the European Commission said notes and coins in euros should be accepted in all cases an any other form of payment 'only possible if based upon reasons related to the principle of good faith' such as 'the retailer not having sufficient change available' – but this was back in 2010, a time when Spain, among many other European countries, were predominantly cash societies with card payment facilities being the exception and not widely available.