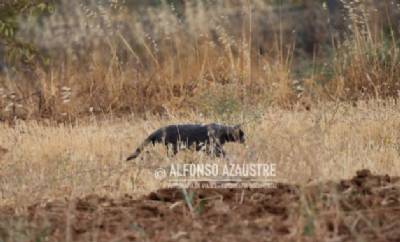 WILDLIFE and travel photographer Alfonso Azaustre has captured a series of close-ups of the 'Granada panther' spotted by numerous witnesses on the loose in the countryside – and his footage shows there is nothing to worry about.

The Guardia Civil's environmental wing, SEPRONA, had been out searching after a flood of reports of sightings near the town of Ventas de Huelma, including one from a Civil Protection squad volunteer.

Photographs had been taken, but from a long distance, since nobody wanted to get up close and personal with a carnivorous animal which can reach up to 1.85 metres (6'1”) in length and 100 kilos (15st 10lb) by adulthood and whose habitual diet includes wild boar, deer, rodents the size of dogs, and anteaters.

This said, although SEPRONA had told the public to keep its distance, the team had also assured that in general, black panthers are more likely to flee and hide if they see a human than to attack.

Heading for the area in which the panther was last seen and standing over 50 metres (about 164 feet) away, professional snapper Azaustre used his work equipment including a 400mm zoom lens to get photos so detailed that they looked as though they were just a few steps in front of the 'panther'.

And the second picture of his shown here makes it very obvious that the only ones who need to be scared if they come across the animal at the centre of the search are mice and rats.

Not only is the 'panther' actually a domestic cat – and one in very good condition, so likely to have an owner – but it is not even black; it is dark grey.

Azaustre, 44 – who also works as a wedding photographer - said: “The truth is that, from a distance, it looks very large, and its tail is really long.

“Then, when you get closer, there's no doubt it's not a panther.

He released his pictures to SEPRONA and to Granada-based daily newspaper Ideal, whose reporters spoke to vets. 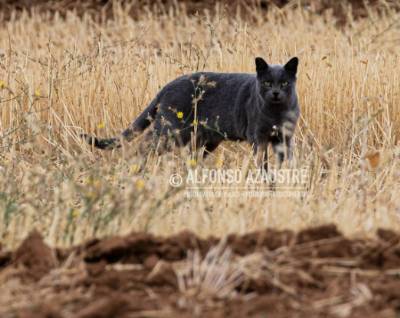 These assured the feline in the picture is definitely a domestic pet, not even a mountain cat or any other wild species.

“It doesn't have either the head or the body of a wild species,” they said.

SEPRONA is still trying to catch him or her, so they can check whether the cat is chipped and notify the owner, or pop the pet in a shelter if not, so that when the owner eventually sees the media footage, he or she can go and fetch their beloved purrball.

If the cat does not have an owner, he or she will be taken to a shelter so a new home can be found.

Catching loose cats, domestic or feral, involves using a large basket or portable cage of the type kept at veterinary surgeries, with food placed inside – once the cat enters, the 'door' automatically closes and locks.

These baskets are used for trap, neuter, return (TNR) programmes for feral cat colonies, so they can be caught with minimal distress, sterilised, and returned to their usual patch.

Feral cats in Spain are considered 'domestic' even if they do not have owners, since they are the same species, meaning local authorities are required to ensure proper care for them.

This usually involves working with local volunteer cat-feeders, animal shelters, or both, and in some cases, setting aside a large enclosed area with open spaces and shade from sun, wind and rain, and moving the colony into it, to protect them from traffic or other dangers.

Ill-treating – or worse – feral cats carries the same levels of punishment under Spanish law as doing so to domestic pets, including hefty fines and even prison sentences.

A HANDFUL of witnesses swear they have spotted a black panther prowling around the Granada-province town of Ventas de Huelma – despite this predatory feline being native to the jungles of Central and South America....

ANIMALS at Tenerife's biggest and most famous safari park are celebrating the start of summer via social media to keep in touch with their human fans until the centre reopens for visitors. Loro Parque –...

Brown bear spotted in Galicia for first time in 150 years

EXCEPTIONALLY-CLEAR and very close-up footage of a brown bear has been taken in Galicia – the first time the species has been sighted there in 150 years. Producer Felipe Lage from Zeitun Films had set up cameras in...