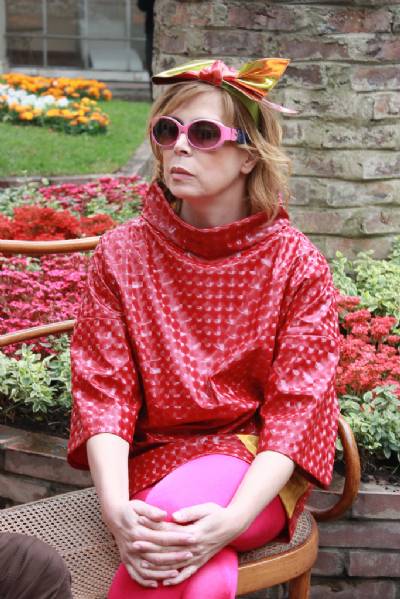 ONE of Spain's most iconic fashion designers revealed on a TV panel show that she has a 'secret sister'.

Sharing studio space with Javier Santos – who is still embroiled in a paternity suit with his biological father, legendary singer Julio Iglesias – Ágatha Ruiz de la Prada said she did not realise she had a sister until her own father passed away five years ago.

She said her father had never recognised paternity.

“During his last days, he received a notification from the court, which he stuffed into a drawer,” said the Madrid-born clothing and accessories creator.

“There was a little girl mentioned in it – I think it was his daughter.

“And there she was. I've never met her, but my mother did get to know her very well.

“I think she's an architect, lives in Madrid, and apparently looks a lot like me.”

The designer, 60, famous for her psychedelic colours and flamboyant patterns on everything from skirts and tops to bath towels and pencil cases, jewellery, handbags, notebooks, and just about anything that can be worn or used in the home – even public safety volunteers' jackets in 2017, and anti-Covid masks designed in aid of Save the Children, which sold out at Lidl within hours – was on the talk show La Hora on the very day she was a victim of a burglary and her entire new women's clothing collection stolen.

Ágatha told the tale of her sister to show Javier Santos that he should not give up in his quest for justice for himself and his mother, María Edite, 65, who had never hidden the fact from her son that she had had a brief relationship with Julio Iglesias that led to his being conceived.

In the case of Ágatha Ruiz de la Prada's sister, the court decision was radically different.

“This girl has my father's surname and also inherited from him, legitimately,” she explains.

“She had asked our father to provide DNA samples, but he didn't want to.

“Based upon his refusal, the judge automatically ruled that he was her father.”

Ágatha's father was the famous architect and aristocrat Juan Manuel Ruiz de la Prada Sanchiz, and her mother was María Isabel de Sentmenat y Urruela, also an aristocrat, and from Catalunya, who committed suicide in 2005.

Upon her maternal uncle's death, Ágatha became 23rd Marchioness of Castelldosríus, 29th Baroness of Santa Pau, and Grandee of Spain.

Javier, 44, managed to obtain DNA from Julio via a private detective in Miami, where the singer, and also Javier's half-brother, pop household name Enrique Iglesias, live.

The investigator had taken tissues from a bin used by Julio, and the DNA on it showed a perfect match.

But Julio refuses to supply a 'legitimate' and voluntary sample for the court – and actually appealed when a judge in Valencia ruled that he was Javier's father.

Iglesias' appeal was upheld, meaning Javier is back to the drawing board, and has applied to the Supreme Court, the highest contentious audience in Spain.

His mother says she and her son and daughter-in-law are prepared to go to the European Court of Human Rights (ECHR) if necessary, and it has since been revealed that the United Nations are investigating the case.

María Edite says Julio knew when Javier was born, and had even seen him since, although did not talk to him.

One of Iglesias' other sons, Julio José, recently introduced Javier to his friends as 'his brother'.