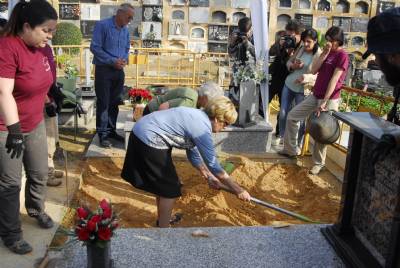 TEENS will be taught at school about the Civil War, Franco's dictatorship and the Transition to democracy involving the signing of the Spanish Constitution as part of a new 'Law of Democratic Memory' passed by the national government.

At present, the Second Republic, Civil War and Francoist régime are included in History for ESO (Spain's answer to GCSEs) and Bachillerato (A-Levels), although the latter would only be taken if the student follows the 'arts route' rather than the 'science route' through sixth form.

And the curriculum content is set to be 'updated', says government spokeswoman Carmen Calvo, with a greater emphasis on democracy, human rights, anti-fascism and the fight for freedom.

The idea, she say, is to ensure a situation such as Spain lived through between 1936 and 1975, and which did not truly come to an end until December 1978, will 'never happen again'.

This is part of a series of reforms to the existing Law of Historic Memory, introduced by the previous socialist (PSOE) government in 2007 and which, among other features, seeks redress for victims of fascism throughout Spain's history – even as far back as the 14th and 15th centuries, since anyone who can prove they are directly descended from the Sephardic Jews thrown out of the country during the Inquisition and the years before and after it has an automatic right to Spanish citizenship, jointly with their existing nationality.

More recently, it has been announced that the Law of Historic Memory will allow for joint Spanish nationality for any of the descendants of the members of the International Brigades – who include Brits, Irish, Americans, Canadians and Australians among others from 50 or so countries – who helped in the fight against fascism during the Civil War.

None of the International Brigade's original members are known to be alive now, but those who would be able to get a Spanish passport as a 'thanks' would include the direct descendants of novelists Ernest Hemingway, George Orwell, Laurie Lee and Antoine de Saint Exupéry.

Other aspects of the Law of Historic Memory include the requirement for all towns in Spain to remove any public features that could be considered, or which originally were, a homage to Franco and his allies, including street names and statues.

The forthcoming Law of Democratic Memory does not change any fundamental aspects of the Law of Historic Memory, says Spain's government, but merely 'goes further' and 'increases its focus'.

Its name will change, though, since, as Sra Calvo explains, the title 'historic memory' can 'mean almost anything', whilst the cabinet's aim is to 'ringfence' the 'fight for Spain's freedom and rights', promoting the 'defence and knowledge of' the country's 'democratic past' and 'the recognition, redress, dignity and justice of victims' of dictatorship, war and fascism.

Along with widening the focus on the values of democracy, freedom and fairness in secondary-school education, the law reform will automatically allow any war crimes or dictatorship crimes to be investigated – including court cases currently ongoing in Argentina being able to be examined and tried in Spain if required – plus a DNA bank set up for helping to trace those missing in combat or believed to have been murdered by Franco's régime, enabling them to be identified.

A series of unmarked common graves have been dug up in the last few years in a bid to put names to all those dumped in them after they were shot by firing squad for their anti-fascism beliefs, and to be able to return their remains to any surviving relatives, who can then give them a proper burial.

In many cases, those relatives are old enough to remember the victims' ordeal – a resident in Gandia (southern Valencia province), now in his 80s, was recently able to pinpoint to local historians the exact spot where he saw his father shot and buried whilst, as a terrified seven-year-old boy, he hid in a ditch.

Deputy president of Spain, Pablo Iglesias, also became emotional when a pit was excavated at the cemetery in Paterna, to the west of Valencia, since he had cause to believe his great-uncle's body was in it.

The Law of Democratic Memory not only promotes exhumations of victims, but of the fascist brigade itself where these are in close proximity to those they murdered.

General Franco was exhumed last year from the giant mausoleum just outside Madrid, the Valle de los Caídos ('Valley of the Fallen'), which has long been considered a war memorial site and, as victims' families had been stressing for many years, was not exactly an appropriate spot for a fascist leader to be buried – right alongside those he assassinated.

The law reform will reclassify the Valle de los Caídos as a civil cemetery, but it is not clear whether the giant cross will be removed.

Far-right Vox is dead against doing so, but the PSOE and Pablo Iglesias' left-wing party Podemos believe the mere fact that it was erected by Franco's men and during his reign means it is more than simply a symbol of peace and of the Christian faith, but is a nod to 'nationalist Catholicism', or the extreme right-wing brand of Christianity used to oppress society during the dictatorship.

Additionally, the legislation changes will ban any society, association or public demonstration with a pro-Franco theme, including showing the pre-Constitutional flag in support of the far-right dictatorship, and 'humiliation of, incitement to or actual hatred of' the leader's victims.

It means the Francisco Franco Foundation, run by the dictator's surviving family, is technically outlawed – already, it is banned from receiving any form of public funds and any overt actions or manifestations by its members considered to be 'an apology for totalitarianism' are deemed as being 'against the public interest' and will face criminal charges.

Any deliberately pro-fascism, pro-dictatorship or pro-Francoist demonstrations, displays or similar will attract fines that could reach €150,000.

The above photograph shows a relative helping with the exhumation of 'Pit 112' in Paterna, a common grave known to house the remains of firing squad victims, and was taken by the Valencia provincial government, or Diputación de Valencia.