Spanish citizenship for descendants of International Brigades: The unsung heroes of the Civil War

Spanish citizenship for descendants of International Brigades: The unsung heroes of the Civil War 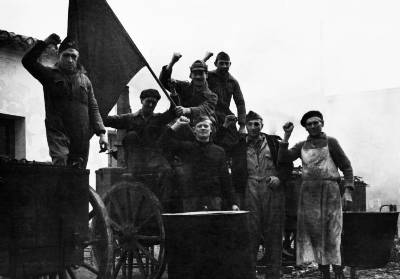 IF YOU can prove you're a direct descendant of one of the members of the Civil War International Brigade, you may be automatically entitled to Spanish nationality – jointly with your own, and whether or not you have ever lived in Spain.

An amendment to the Law of Historic Memory – originally launched in 2007 – has been agreed, and is expected to become set in stone soon.

“Descendants of the International Brigades who fought for freedom and against fascism in Spain will be able to access Spanish citizenship,” says Unidos Podemos leader and first deputy president, Pablo Iglesias.

“It was about time for the government to tell these heroes and heroines of democracy, 'thank you for coming'.”

Brits included – and exiles from fascist régimes in Europe

Over 50 nationalities made up the International Brigades, including British – to gain first-hand testimonials of the UK citizens who travelled to Spain to help out during the Civil War, men and women alike, the most accessible and fascinating source is Max Arthur's book The Real Band of Brothers – and they were drafted in between 1936 and 1938 inclusive.

The Brigades were voluntary, and around 59,000 people joined up from all over the planet, including Latin America, the USA, Canada, and much of Europe, not just Spain's 'traditional' allies.

French, Italian, German, Polish, Yugoslav, Belgian, Czech, Hungarian, Dutch and British were just a handful of these; some of the nations involved had governments who supported Franco's fascist régime and became his allies after he gained power when the Republicans lost the War, showing that humanity and society stretch far beyond the actions of a country's leaders. 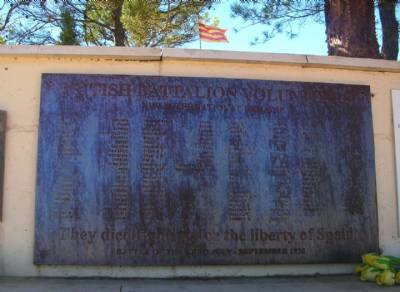 In fact, it is possible some of those who travelled to Spain to aid in the anti-fascism fight were putting their own lives at risk from their national governments, including the Italians and Germans who were against the far right and had been forced into exile before the Civil War.

It is believed that around half the Brigades were people who had escaped fascist or authoritarian far-right régimes in their own countries, including Italy, Portugal, Germany and Hungary.

The Brigades' headquarters was the Gran Hotel in Albacete (Castilla-La Mancha), and those who enlisted on the military side fought in the battles of Madrid, Jarama, Guadalajara, Brunete, Belchite, Teruel, Aragón, and the Ebro – all of which were named after the cities, provinces, regions or, in the case of the latter, the river, where they took place.

Not everyone on the International Brigades was on the front line – women, especially, would not have been able to be soldiers, unlike nowadays, but joined up to work as nurses.

Between one and three in 10 paid with their lives; others, with their citizenship

Men and women alike gave their lives for the cause: About 5,587 to 25,229 of the Brigades' members died during the Civil War.

The exact numbers were never known, and in fact, the exact numbers serving in the Brigades is not clear – available historical data estimate there were between 23,670 and 59,380 in total, meaning their mortality rate ranged from around 16.7% to 29.2%.

Even survivors, in some cases, paid dearly for their altruism: Volunteers from The Netherlands and Belgium who joined the Brigades were stripped of their citizenship of birth upon their return, as it was considered they had served in a foreign Armed Forces. 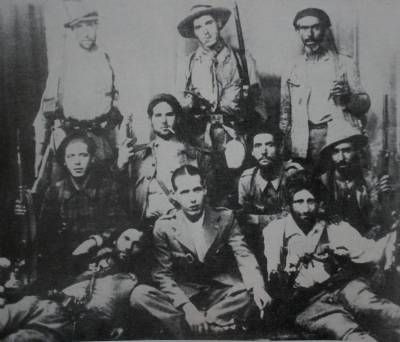 Many of those who put their names forward to help defend the Republicans were World War I veterans, who already had the skills required – and it is said this came across loudly and clearly during the Siege of Madrid during the first year of the Civil War.

A high number were Jewish, and were starting to feel, first-hand, the extent of evil which came with fascism.

Others were socialists, and many were communists – although the definition of communism at the time was more multi-faceted than it is today; The Communist Party in Spain believed in the 'pure' meaning of it, that of shared wealth, equality, and full protection from the State for everyone, in a classless society.

Some were rewarded, some did not live long enough

The British Battalion, within the Brigades, included not just those from modern-day UK but also volunteers from Britain's remaining colonies, who were officially British citizens at the time.

British nationals totalled around 2,500 members of the Brigades.

Only around 305 of these left after the Brigades were disbanded in October 1938 – some had been in Spain for short times or on 'shifts' rather than the whole three years; some had not survived, and a high number opted to carry on living in Spain.

One British International Brigade member was still alive 18 months ago – Geoffrey Servante, who died in April 2019, aged 99; the last one left in the UK.

Battalions were not split by nationality, or by countries under another nation's control – the Edgar André Battalion, for example, included German, Austrian, Yugoslav, Bulgarian, Albanian, Romanian, Danish, Swedish, Norwegian and Dutch. 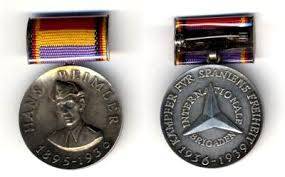 International Brigades members received a Spanish Civil War medal after the conflict (pictured, by by Sebastià Herreros on Flaginstitute.org), although up to one in three would have been granted theirs posthumously.

Spain granted the Brigadiers citizenship in 1996, although only about 600 were, by then, still alive.

This means the vast majority did not live long enough to get Spanish citizenship, which would have automatically been passed down to their descendants – living descendants would, therefore, still hold Spanish nationality today, alongside their own.

Now, Spain wants to grant citizenship to these descendants, so they have the same right to a Spanish passport as those whose parents, grandparents, uncles and aunts, or further back, were still living in 1996.

George Orwell and other famous Brigadiers 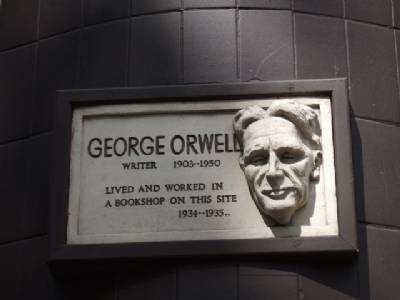 The latter's novel Homage to Catalonia, published in 1938, is a non-fiction account of his experiences with the International Brigades.

Citizenship for descendants of other groups

The latest retrospective move to grant citizenship of Spain either as redress or recognition comes some years after the Law of Historic Memory allowed for descendants of all exiles from the country, who had left during the Civil War or Franco's régime, to be given nationality.

Later, the same legislation allowed anyone worldwide who could prove they were direct descendants of the Sephardic Jews thrown out of Spain at the end of the 15th century to obtain Spanish citizenship.

In fact, after the tragic private jet crash in March 2018 which killed Turkish corporate heiress and influencer Mina Başaran, the entire crew and her seven closest friends who had joined her for her hen weekend in Dubai, it was revealed that two of the women on board were Spanish citizens.

They were the wealthy, upper-class jewellery and swimwear designers respectively, Jasmin Baruh Siloni and Liana Hananel, née Kalma – direct descendants of Sephardic Jews expelled from Spain in 1492 during the Inquisition, who had successfully applied for joint Spanish nationality on that basis.

The first photograph, above, of some of the International Brigade members – taken between December 1936 and January 1937 – is believed to be a State archive picture, and was published by Spanish broadsheet El Independiente.

Picture three, of some of the Bulgarian Brigade, is from Wikimedia Commons, and titled Under the Red Banner, but its original author is unknown.

A bronze plaque listing the names of the British Battalion members who perished during the Civil War was erected in Serra de Pàndols, on Cota 705 ('Hill 705'), and is shown above (by Xufanc on Wikimedia Commons).

Picture five shows a commemorative plaque for George Orwell in Hampstead, by Ceridwen on Wikimedia Commons.

2020 has been an unusual year in many respects, with most of us wondering what on earth could happen next. Well, the next peculiarity 2020 has in store for us will certainly be visible from earth, but will actually...

Regional perimeter closures: what it means for bank holiday...

As the All Saints bank holiday weekend kicks off, the Spanish government has taken steps to try to slow the second wave of coronavirus contagion by restricting movement around the country. Spain currently has over 40...