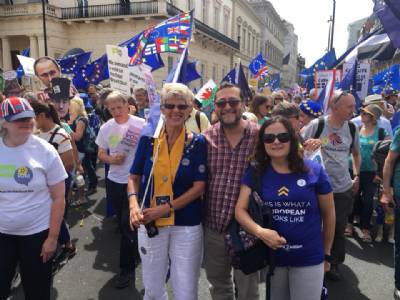 OVER 100,000 Brits and Europeans marched through their towns and cities in the UK yesterday (Saturday) calling for a 'People's Vote' on the final Brexit deal – which remainers have been campaigning to include an option to stay in the European Union.

Among those who joined the main march in London were British expats in Spain who had travelled over specially, and the thousands of Spaniards who live in the UK capital, both of whom fear their ability to live, work, retire and receive healthcare in their countries may be threatened by the process.

Bremain in Spain, a Facebook-led campaign group headed up by Sue Wilson (pictured) took to the streets to fight for the rights of Brits in Europe and Europeans in the UK. She is shown here (centre, left) with María Luisa and Nacho Romero, Bremain members from Spain who live in the UK and also belong to the 'flip-side' sister group, Españoles en Reino Unido Surviving Brexit.

As well as the People's Vote march, Sue will be meeting up this week with representatives from Reuniting Britain, Best for Britain, Britain for Europe/GCG, the association for Europeans living in the UK, In Limbo, and SODEM.

The second picture shows Sue with fellow Bremainer Elspeth with their newly-designed 'Brexit is Bonkers' flag.

Polls in the UK have shown that support for a second referendum is growing fast and that, if this were to go ahead, Remain would lead over Leave by 5%.

Those who advocate a second referendum point out that demographic changes alone justify it, since many of the younger adults who were not yet 18 on the day of the first vote and were unable to cast their ballots are now old enough, and these youths are mostly in favour of staying in the EU.

Also, now that the reality of Brexit is starting to sink in, so has 'Bregret' – a movement of ex-Leavers who wish they could change their minds.

The latest blow to the UK economy is the planned departure of Airbus, which will cost 14,000 direct jobs and 110,000 indirectly.

With the company already having a plant in Sevilla, it wants to keep its operations inside the EU.

Farmers, who, in the majority, voted Leave, are now discovering they will be worse off without EU funding, which the UK initially promised to make up out of national funds but appears unlikely to be able to do so. 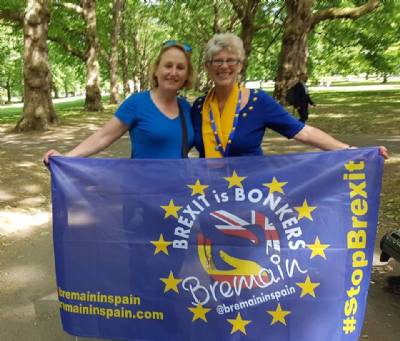 Last October, The Financial Times reported UK growth had slowed down from the annual 3% it was seeing since recovering from the financial crisis down to 1.5%, but more recent estimates hint that it could drop even lower.

Every 0.1% of growth lost means a weekly 350 million pounds out of the UK economy, The FT explains, which is the equivalent of the gross figure paid to the EU for membership and which the Leave campaign erroneously claimed would be freed up for the NHS.

The net figure is around 190 million, due to subsidies being reallocated to the UK, and the grim panorama for the macro-economy and household finances suggests this is a small price to pay for international confidence and the ability to trade goods and services border-free.

European leaders have warned the UK that its desire for a preferential free-trade deal post-Brexit will not be possible, since to enjoy the benefits of the EU, it either has to remain or to stay in the European Economic Area (EEA), along with Iceland and Norway.

And doing so means having to continue to contribute to the EU pot and to agree to free movement.

As well as a second referendum or at least a People's Vote, Bremain in Spain is campaigning for the UK's Conservative government to adhere to its electoral promise of returning votes for life to all British nationals abroad.

Only Denmark and the Republic of Ireland, along with the UK, block their citizens from voting once they have been outside the country for 15 years or more, and this disenfranchisement is likely to have swayed the referendum results.

The votes for life campaign was started by Harry Schindler, a World War II veteran living in Italy and now aged 96, and has now gone to Europe after being rejected by the UK's Supreme Court.

UK residents who were not British citizens were also barred from voting in the referendum, although Commonwealth citizens were permitted, including those of Gibraltar.

Expats on either side of the Channel say this was unfair, since Europeans living in the UK and Brits living in Europe are the ones who stand to lose the most from Brexit.